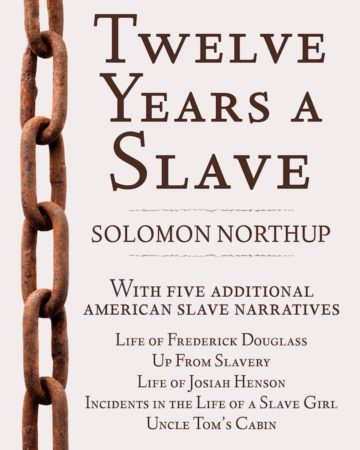 This exciting new release includes the complete text of “Twelve Years a Slave.” Read the amazing story of Solomon Northup before (or after) you see the critically-acclaimed movie of 2013. But this collection doesn’t stop there. It also includes:

* Complete, unabridged texts of the five additional works listed below, all well-known works about slavery in America
* An active table of contents for easy navigation to any book or chapter
* The original illustrations for “Twelve Years a Slave”
* Easy-to-use links to download unabridged audiobooks of four of the works from Librivox
* Well-formatted text with adjustable font and size

Below is a brief introduction to the six included works. (Excerpts from Wikipedia are used in the summaries.)

–Twelve Years a Slave: Narrative of Solomon Northup, a citizen of New-York, kidnapped in Washington city in 1841, and rescued in 1853, from a cotton plantation near the Red River in Louisiana —

— Narrative of the Life of Frederick Douglass, an American Slave —

— The Life of Josiah Henson, Formerly a Slave, Now an Inhabitant of Canada, as Narrated by Himself —

— Incidents in the Life of a Slave Girl —